McLibel – The North London postman and gardener who took on McDonalds and won. 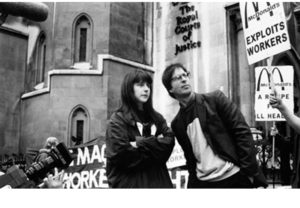 In 1990, McDonald’s brought libel proceedings against five London Greenpeace supporters, including north Londoners Helen Steel and Dave Morris, for distributing a sheet on the streets of London listing accusations against the powerful McDonalds hamburger chain. In previous cases against media outlets there had been settlements and apologies.

The long running saga was captured in film and can be seen in this Spanner film . (donation link here)

The following is based on material in Wikipedia .

The two defendants had to represent themselves, though they received significant pro bona assistance, including from a young (Sir) Keir Starmer.

Although Steel and Morris were found liable on several points the judge at the original case in 1997 ruled that some of the points in the factsheet were true:

The Court of Appeal later ruled in 1999 that:

The case was taken to the European Court of Human Rights, which ruled in 2005 that:

Further developments included the discovery in 2016 of the extent of undercover police surveillance and infiltration of the activist’s London Greenpeace organisation and personal lives.