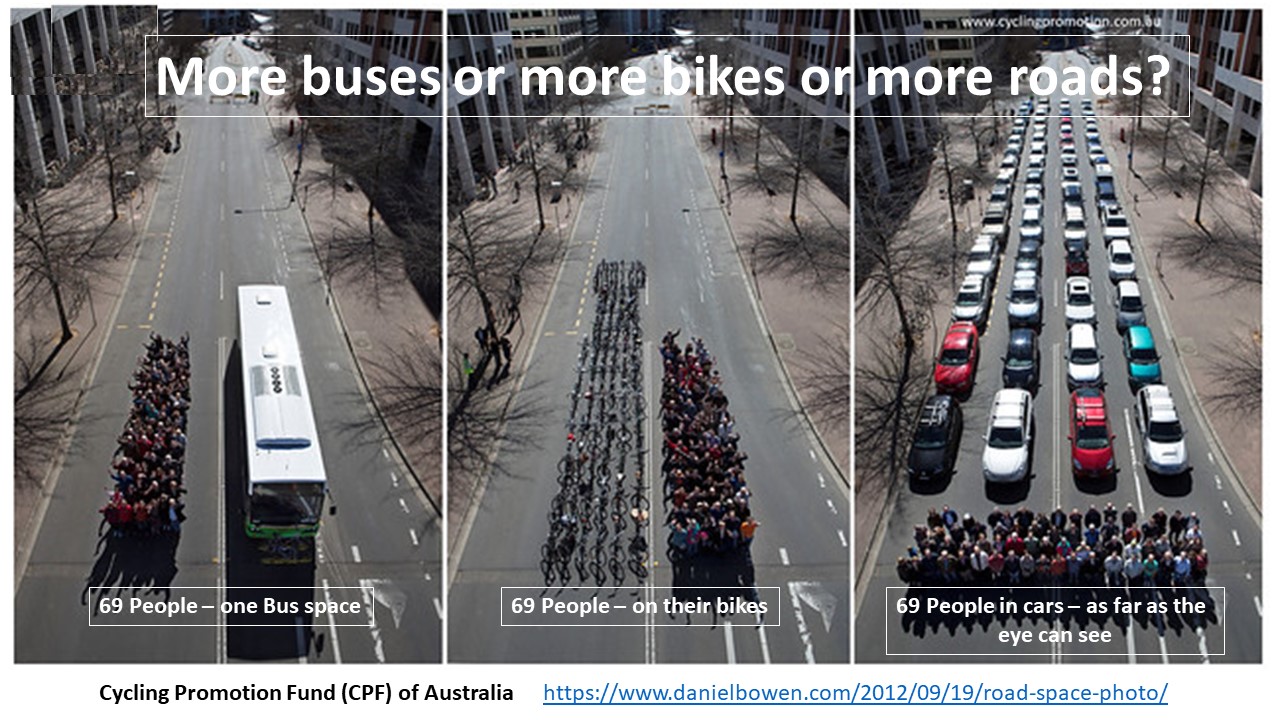 Many trips are short enough to walk or cycle

Haringey Council’s proposed activities are in the ‘pink stripes’ below.

Why would people choose to walk or cycle where they have other choices? Out of the Haringey population of 254,900 there were 63,827 cars registered. See here at ‘Haringey and low carbon buses’ for the areas with good public transport. But 75% of residents don’t have their own car to use, despite paying taxes for roads and putting up with air pollution from the traffic.

And what can be done in Haringey?

– Ill health
– Never ridden a bike
– Bikes too expensive, nowhere to keep one and could be stolen
– Too much to carry inc small children
– Need to arrive looking smart
– Need to get somewhere quickly

Good for the Planet

The Committee on Climate Change advises the Government on reducing greenhouse gas emissions (measured in CO2 equivalent) It’s Surface Transport Sector Summary  assumes that “5-7% of car journeys could be shifted to walking and cycling (including e-bikes) by 2030, rising to 9-14% by 2050.” As a consequence “Relative to the baseline, our scenarios assume that there is potential for a 1-4% reduction in total car mileage by 2030, and between 4% and 12% by 2050.”

This reduction in car mileage would deliver resultant reductions in CO2 emissions, but what would bring that about?

EMISSIONS – WALKING AND CYCLING 1.5 MILES ON US DIETS

The Pacific Institute in April 2008 in Driving vs. Walking: Cows, Climate Change, and Choice calculated the carbon equivalent emitted for a 1.5mile trip (including petrol/diesel CO2 for driving) depending on the calories from different (American) diets. 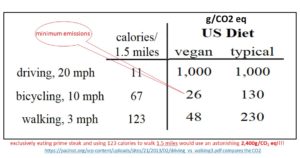 The block on the left explains how many calories are typically used to walk or cycle. The carbon emissions to get these calories into the pedestrian or cyclist depend on how the food they eat for these calories was produced.

Mike Berners-Lee  How Bad Are Bananas? The Carbon Footprint of Everything    (p23) also provides figures for cycling (adjusted to be per 1.5 mile) based on UK food production and distribution

(The figures paint a shocking comparison of the carbon implications of foods regardless of the activity enabled by the food!!!)

The Haringey Cycle Action Plan  says that “research suggests that regular cycling can produce a number of impressive health gains, including protection against coronary heart disease, stroke, type 2 diabetes,  colon cancer, stress, high blood pressure and obesity. On average, people who cycle 20 miles or more a week experience the health of people ten years younger. New cyclists covering short distances can reduce their risk of death (mainly due to the reduction of heart disease) by up to 22 per cent.” And also a “tenfold increase in cycling would result in a reduction of individual pollutants of several million tonnes each year.“ 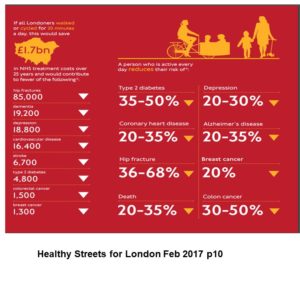 From the Healthy Streets for London Feb 2017.

Once a bike has been purchased each trip is cost free compared with public transport or fuelling a vehicle. 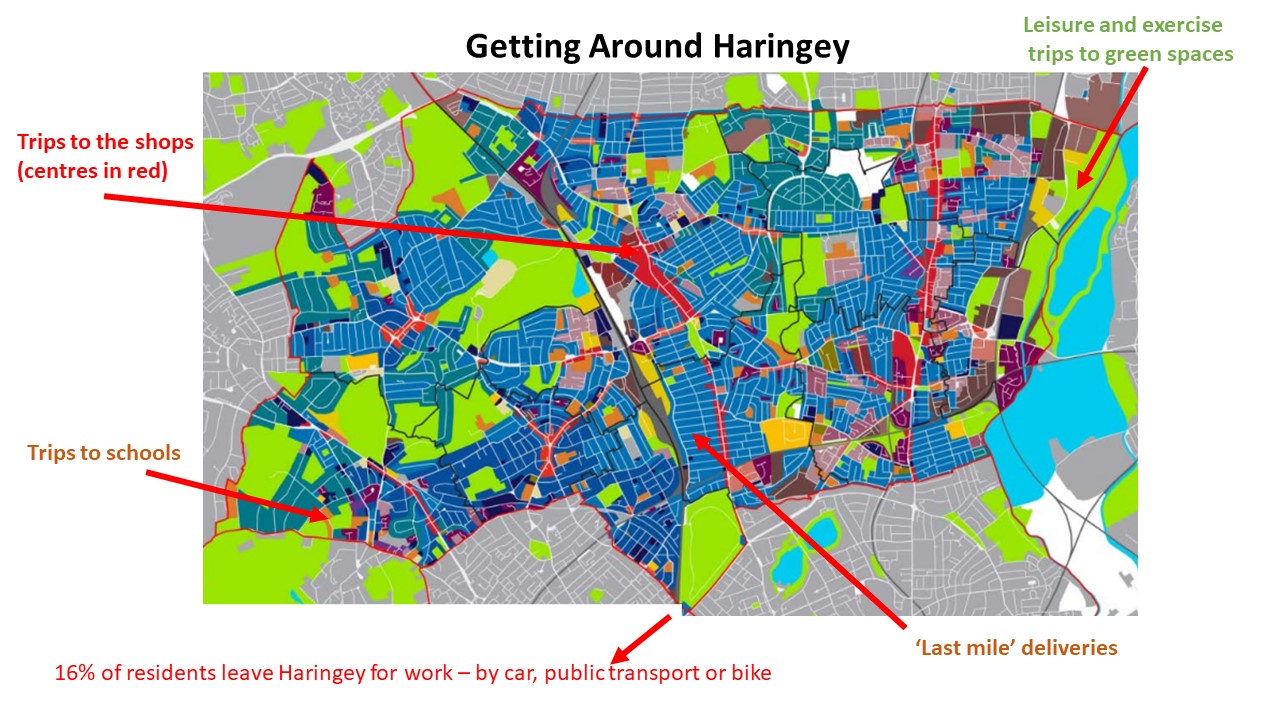 How far are typical trips in Haringey?

Very many trips could be by bike or by foot.

What will boost Walking and Cycling?

The Department for Transport (DfT) have the UK wide responsibility for road strategy.  They say that they “support the transport network….  We plan and invest in transport infrastructure to keep the UK on the move.”

DfT’s cycling and walking plan for England – Gear Change. A Bold Vision for Cycling and Walking July 2020 set out a vision for measures to encourage uptake of active travel, whereby “The ability to deliver a right to cycle requires infrastructure and routes which are accessible to all regardless of age, gender, ethnicity or disability and does not create hazards for vulnerable pedestrians. Improvements to highways should always seek to enhance accessibility for all.” It set out a future in which 50% of all journeys in towns and cities are cycled or walked, up from 29% today. Getting down to basics, we’ll only move away from cars if we have:

It was notable that road use during lockdown and following the easing of restrictions was significantly different to usual. “Cycling also increased significantly following the imposition of lockdown restrictions, with summer weekends seeing over three-times as many cyclists as pre-pandemic levels. Since the easing of lockdown restrictions, cycling levels have remained high. However, from late September onwards, although still mostly above pre-pandemic levels, the number of cyclists started to decrease.” (Committee on Climate Change)

In June 2020 the DfT announced a£250m emergency fund to encourage active travel as part of opening up the economy when Covid subsides. It is part of a £2bn package to provide pop-up bike lanes with protected space for cycling, wider pavements, safer junctions, and cycle and bus-only corridors. TfL published Interim Guidance for delivery using temporary and experimental schemes in March 2021.

Healthy streets is the vision for London – explained by TfL  to improve air quality, reduce congestion and help make London’s diverse communities greener, healthier and more attractive places to live, work, play and do business. The Healthy Streets indicators are shown in the Designing Better Streets panel below. The Mini Holland scheme in Waltham Forest and the Liveable Neighbourhoods trail in Crouch End are explored below.

Walking and Cycling Grants London is a programme which supports London’s diverse communities to walk and cycle more often and more safely. It offers grants to projects of up to £10,000 over a three-year period to community groups and organisations, to create projects and programmes that allow all communities across London to enjoy the benefits of walking and cycling.

All the Haringey successful and unsuccessful bids for these measures are listed here. 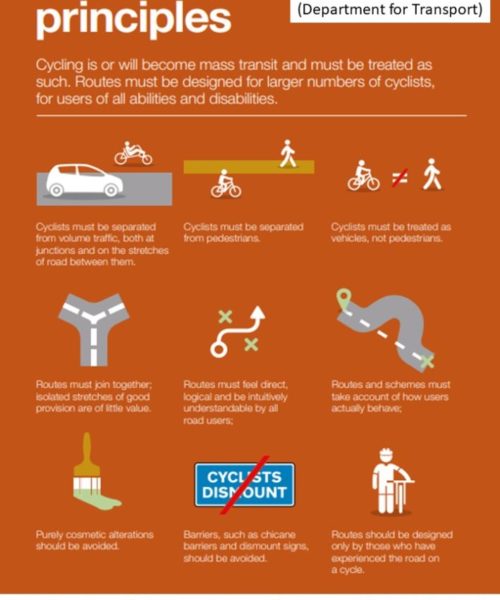 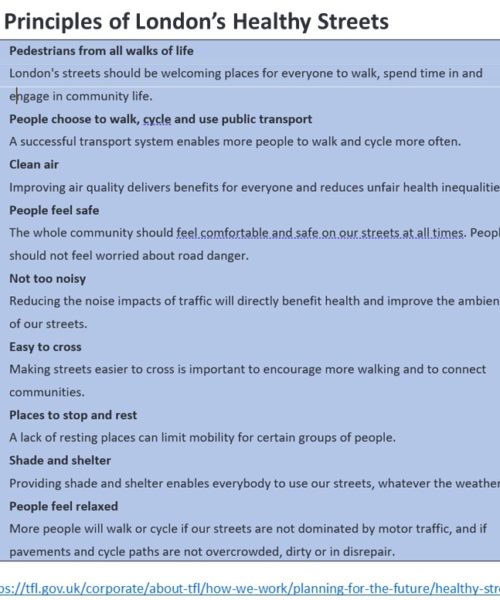 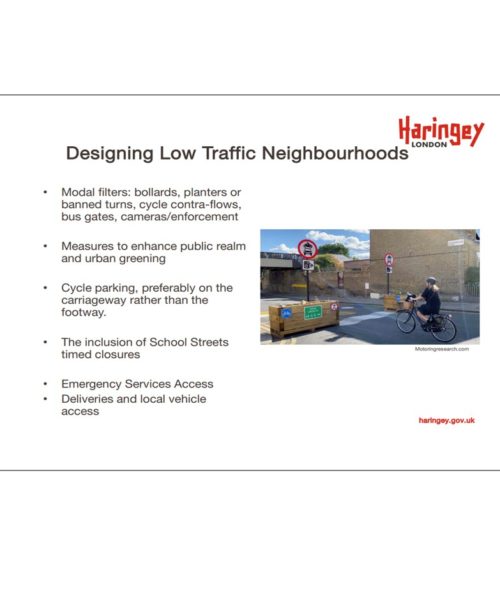 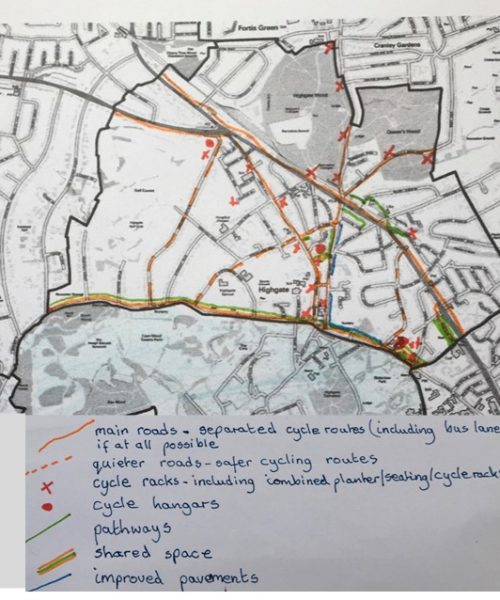 Easier to get a bike, store a bike, keep a bike

If measures such as widening pavements, charging more for driving vehicles fuelled by fossil fuel and improving public transport really happen, Haringey’s street scenes could reflect the vision on our HCF home page. The mix of traffic will be quite different and will include pedal and (low carbon) electric power last mile delivery, trikes for the less able, ebikes and escooters.

• Low carbon deliveries – In 2018 TfL awarded funding “to six business groups to make deliveries more efficient and reduce congestion in London like micro-consolidation, cargo bikes and preferred supplier schemes.”  But according to this press release from Caroline Russell in November 2020 these schemes were put on pause when funds were withdrawn.  The Sun Rider featured below generated 50% electricity from the sun on an average day – 100% on a sunny day.
• Trikes for the disabled – Although some people are unable to walk or bike many more will be able to use a trike – if funds allow.
• eBikes – these can make commuting by bike far more possible, and work schemes can make them affordable. Prices range from several hundred poundts to several thousands of pounds. With a Swytchbike conversion kit any bike can be converted to an electric bike.
• eScooters – these could be very popular, but would not be welcome on pavements and legislation is not currently enabling them on the roads – where riders seem very vulnerable (especially without crash helmets) 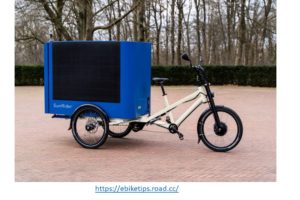 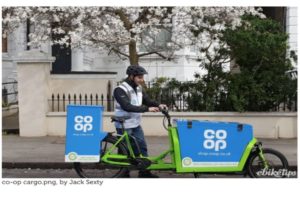 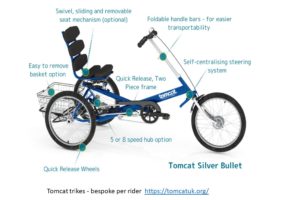 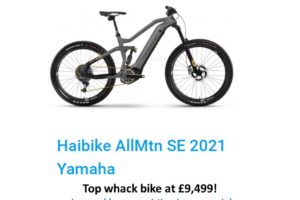 Top of the Range 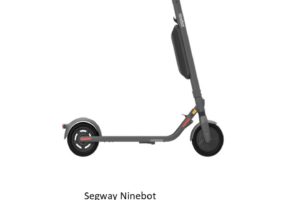 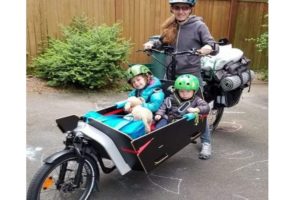 Kids on the go