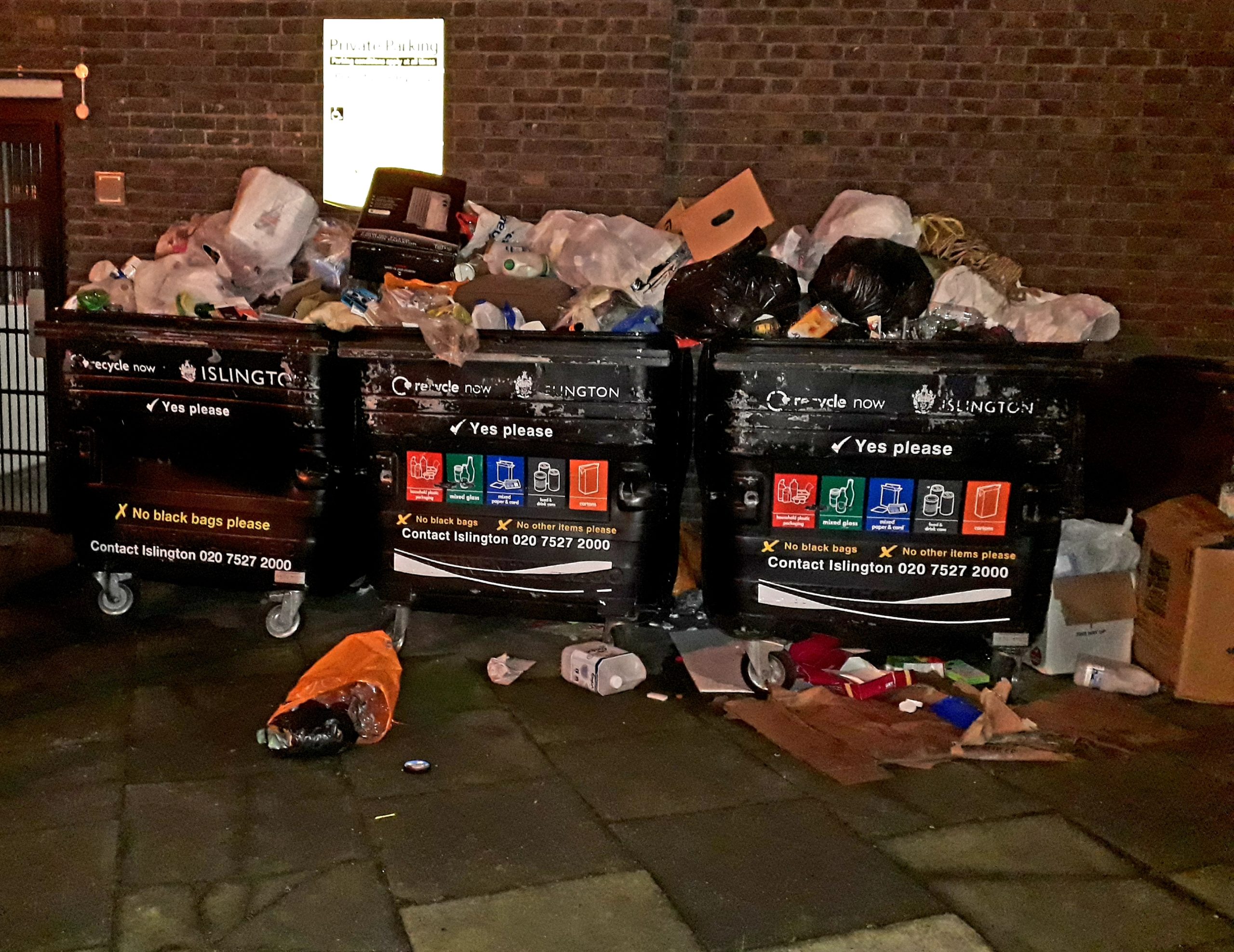 KEY MESSAGES FOR STUFF YOU WANT TO GET RID OF

North London discarded 1,796,000 tonnes of household and commercial/industrial waste in 2021, including 190,000 tonnes from Haringey, according to the London Plan (p386). The ‘arisings’ collected by the Local Authorities, including some trade waste is collected as a) recyclables, b) food waste or c) ‘residual waste’ ie black bag and the onward journeys for these streams is covered below.

Haringey, together with Barnet, Camden, Enfield, Hackney, Islington and Waltham Forest owns the North London Waste Authority (NLWA) and has contracted the disposal stages to the NLWA.  Haringey does not include the climate change consequences of waste in the Haringey Climate Change Action Plan (other than the council’s own waste).

The cabinet members in Haringey who sit on the board of the North London Waste Authority (NLWA) are Cllr Isidoros Diakides at isidoros.diakides@haringey.gov.uk and Cllr Mike Hakata at mike.hakata@haringey.gov.uk 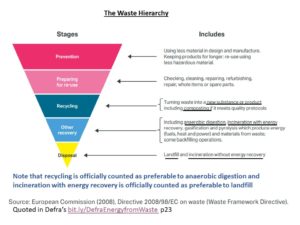 Each Borough contracts individually for the collection of refuse from kerbsides, estates, recycling centres plus there are private contracts for commercial and industrial waste.  For instance, in North London, Veolia has contracts with Camden and Haringey to collect household waste. The NLWA budget report shows that there is a variety of contracts across the North London Boroughs for different waste and recycling streams. The collection company takes what it has collected to either Biffa Edmonton, London Energy at Edmonton Eco park  or elsewhere depending on whether it was collected as recycling, ‘residual waste’ (black bag), food waste or garden waste. 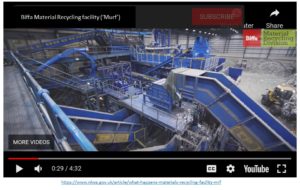 Changes that will affect the waste collected

Consistency in Recycling legislation is being passed proposing that, unless exemptions have been obtained, all local authorities must move from ‘co-mingling’ dry recyclables to separate collections of •glass, •metal, •plastic, •paper and card. Producers will be subject to an ‘Extended Producer Responsibility (EPR) scheme and have to pay for producing excessive packaging, which will be given to waste authorities.

Foil, foil trays, metal aerosols cans, metal jar lids and aluminum tubes will be put in the metal stream (with householders told to put heavily soiled items in residuals and advised how to empty aerosols safely).

Plastic film and flexible packaging will be in the plastic stream, and later in a new dedicated stream.

Food and Drinks Containers will be subject to a Deposit Return Scheme (DRS) and will returned to dedicated locations for refunds, rather than put out for collection.

Cartons will be collected in the card stream rather than the plastic stream.

These changes were due to start in 2023, but Green Alliance reports (p13) that the Environment Bill is delayed until the next session of Parliament and the Deposit Return Scheme for bottles and cans is delayed until 2024.

The horrors of landfill 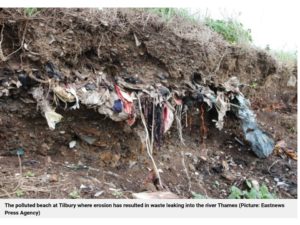 Abandoned Toxic Waste – The site above is at the Goshems Farm former landfill site in East Tilbury and was in use for 50 years before tipping stopped in the 1980s. The Metro Nov 2019 says “toxic waste – which is now prohibited from being put in landfill – is buried in the soil and is leaking into the river.”

Currently there more than 21,000 old landfills scattered across England and Wales according to a Jan 21 Ends Report covered by the Guardian.  “Old dumps can contain substances now banned or restricted such as asbestos, polychlorinated biphenyls (PCBs), PFOA and PFOS, all of which are extremely toxic to human health and the environment.”  …. ”About 746 toxic dumps are located within 500 metres of water bodies, 13 are beneath golf courses and four below school grounds” (of the ones where the contents are known).

Defra’s Environment Agency is responsible for regulating current Landfill, but Local authorities don’t have the funds to clean up toxic sites, and increasingly residents are resorting to the courts to get action. For example Mathew Richards (aged 5) lives approximately 400m away from a landfill that emits hydrogen sulphide (H2S) that is shortening his life. His mother won a High Court Case with a ruling that the Environment Agency must do more to protect him, and local residents, from the landfill fumes.

Defra’s Environment Agency is responsible for regulating landfill, as per 2020 guidance for disposing waste to landfill. Defra’s Energy from Waste Guide  p23 shows the waste hierarchy and energy from waste and landfill are the disposal options that require careful comparison to choose the lower GreenHouse Gas decision.

The Government policy is to move away from landfill towards incineration by taxing landfill at £96.70 per tonne deposited and even exempting electricity from incineration from the UK Emissions Trading Scheme tax.

The NLWA position is that “Landfill is extremely damaging for the environment and the worst option for dealing with non-recyclable waste.” The NLWA admits that it does send some North London waste to landfill – 8% to Ockenden in 2018/19 and 5% to Bletchley in 2019/20, though it is not clear under what circumstances. And the NLWA Budget and Levy 20/21 report records that its budget for landfill is due to rise from £1,438K for 20/21 to £1,675K by 2024/25.

London Energy, that is contracted to manage incineration for NLWA, has a vision to see no waste from London Energy sites sent to landfill.

These policies are based on calculations that ignore CO2 emissions from incinerating biogenics and the CO2 sequestration from landfilling plastic and biogenics.

KEY LANDFILL MESSAGES. Old, abandoned landfill sites are an environmental disaster. Current sites that allow methane escape are damaging the planet. Landfill that sequesters CO2 and prevents escape of methane could be the less bad option for some of our waste.

Changes that will affect the food and garden waste collected

Consistency in Recycling legislation is being passed proposing that, unless exemptions have been obtained, all local authorities must collect food waste weekly with (free) caddy liners and collect garden waste with more limited charges to residents.

The collected food and garden waste must be sent for anaerobic digestion or composting. 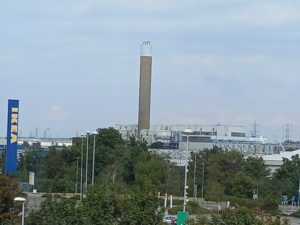 The horrors of incineration

The Plume Plotter illustrates the reach of emissions from the current Edmonton incinerator, depending on the wind direction. It lists the level of the pollutants and particulates coming from Edmonton per day, with figures at ‘DETAILS’. 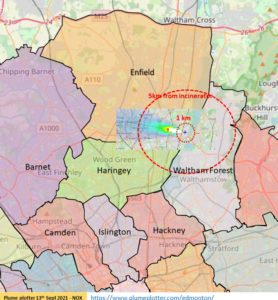 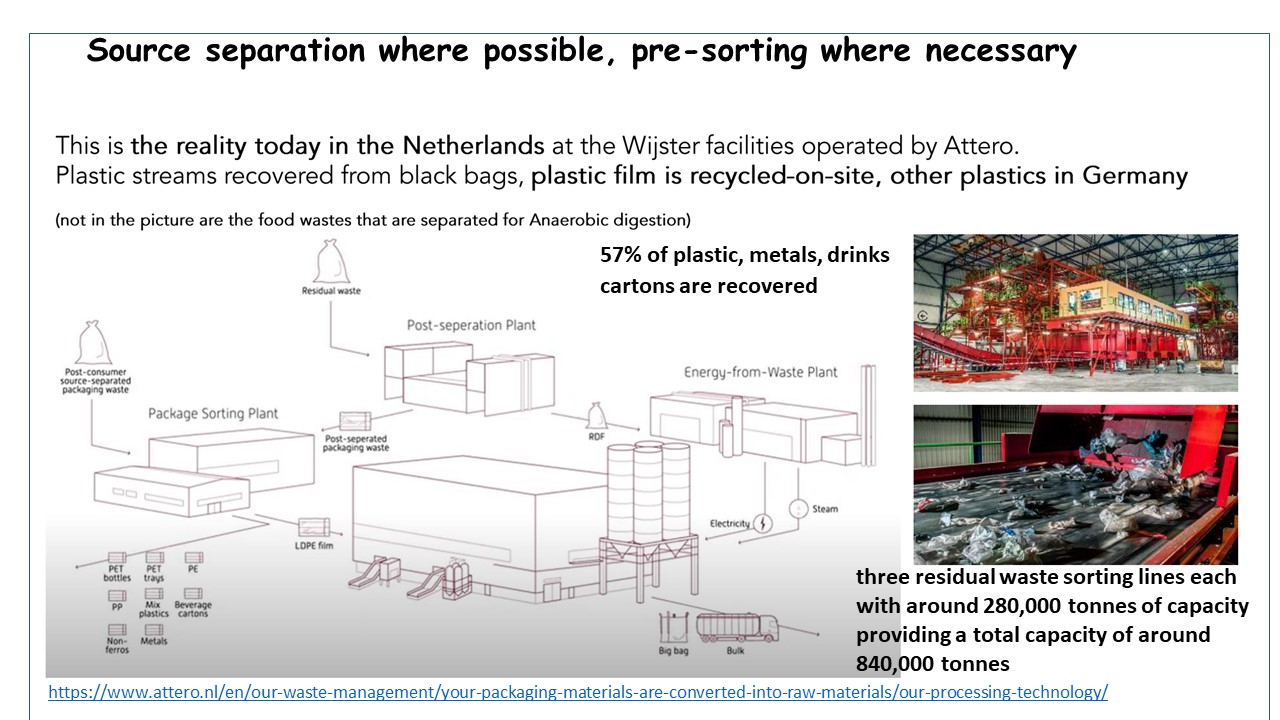 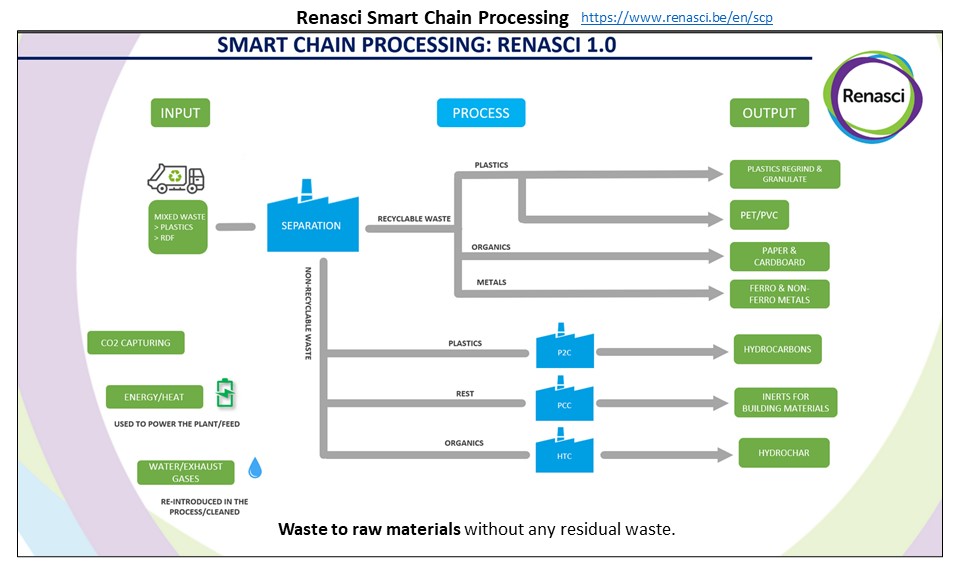 Single Stream collected recyclables are best, but Post Separation Recovery technology can retrieve most of the recyclables that would otherwise go to waste. In the Attero facility in de Wijster an estimated 57% of Plastic, Metal, Drinks cartons are recovered.

The Environmental Services Association (ESA), the trade body representing the UK’s resource and waste management industry, made a commitment to a net-zero greenhouse gas emissions strategy for the UK recycling and waste sector by 2040 as part of its members £10bn recycling investments, according to Protos.

Currently there are many facilities already in use to separate out recyclables from waste, such as de Wijster in Holland, with more advanced plastic waste recycling plants being built, such as the Peel NRE at Ellesmere Port, which will use smart chain recovery to remove the need for incineration or landfill. Recyclables in North London black bags could be retrieved and sent by water to Ellesmere Port rendering a new incinerator an expensive white elephant.